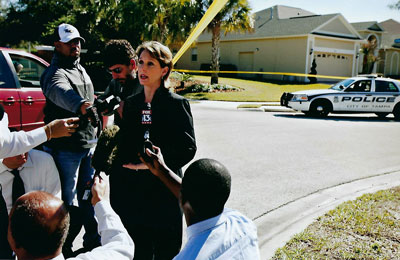 The role of a Police Public Information Officer has changed dramatically in the last decade. Even as broadcast news was expanding beyond the traditional 6 and 11 pm newscasts and executives were deciding how to maximize internet news; social media was not yet a factor.  Facebook and Twitter were around, but they were called micro blogs and were only used by limited audiences.  Before social media, PIO’s would issue press releases, emailing or even faxing them to the media.  The information was released on our terms and schedule.  Unless the media heard about an incident on the scanner or received a call from the public, they wouldn’t even be aware that something was happening.  But today, everyone with a smartphone is a reporter, forcing police departments to respond around the clock.

When Captain Chesley “Sully” Sullenberger gracefully glided his Airbus 320 onto the Hudson River on January 15, 2009, social media made a dramatic impact on news. That event forever changed the way news was gathered and disseminated.  A passenger on a nearby ferry snapped a picture and tweeted it.  Twenty-four-hour news channels picked it up and broadcast the image.  Shortly afterward, Twitter exploded.  News organizations launched social media accounts while anchors and reporters began promoting their Twitter handles.  And this meant that Public Information Officers now had to deal with instant news. Police departments began creating Twitter and Facebook pages. Many did so reluctantly and some still are not fans, but modern law enforcement must be on social media.  It is not a hobby or novelty; it is a necessity.  Indeed, the conversation will happen in the social media universe with or without you, so it’s better to be there to ensure the facts are accurately reported.

Social media has simultaneously made the job of Public Information Officer more challenging, but also easier.  Now, information can be disseminated instantly not only to the media, but directly to the public.  While we must react, and respond to questions and complaints more, the public is more engaged with police departments that are active on social media.  With this engagement, officers and citizens can work together to improve their neighborhoods. Years ago, a victim of an auto burglary  would file a police report, and may never know if an arrest was made. Now, through social media, we can engage our residents to help solve the crime and then celebrate success together when the suspect is arrested.  This shows citizens a side of law enforcement that we don’t always hear about and that’s simply; officers care. They care when your car is broken into, they care about your safety and your quality of life.

Also, more Public Information Officers are civilians, former media people. Why? Because the role of a PIO has become visual, requiring videos, pictures, and stories about the agency.  Hiring a former reporter as a PIO enables agencies to become more multimedia. A former media person has the skill set to show the daily work of officers visually with photographs or by creating videos and posts highlighting the human side of police work.

Today, Police Public Information Officers are not only spokespersons, sending out police reports; they are also multi-media coordinators, using social media, photographs, video and if necessary, lip syncing to share an agency’s message.

PIO at Boca Raton Police
Mark Economou has been the Public Information Manager for the Boca Raton Police Department since 2008. Mark was responsible for developing the department’s social media presence, making it the first department in the State of Florida to actively use social media.Economou also spent more than 20 years in television and radio news, and 5 years in corporate communications.He is currently the Southeast Regional Chair for the PIO Section of IACP and the PIO Co-Chair for the South Florida Regional Domestic Security Task Force.